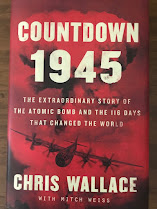 Countdown 1945: The Extraordinary Story of the Atomic Bomb and the 116 Days that Changed the World by Christ Wallace with Mitch Weiss

This book gives you a glimpse into the personal life of Harry S. Truman, who was probably as surprised as anyone when he became president upon the death of Franklin D. Roosevelt. But an even greater shock was to find himself facing the decision of whether or not to drop the atomic bomb. The book delves into the lives ordinary people who found themselves working on the development of the bomb without ever realizing the magnitude of their assignment.

From European conferences with heads of state to life at Los Alamos, a community of thousands worked together on a secret project, you’ll read of conversations and emotions that led to the development and detonation of the atomic bomb. And you read of the aftermath, the impact of realizing what they had created, after Hiroshima and Nagasaki were bombed in 1945, an event that ended World War 2.

I liked the way the authors organized the book around events that occurred during the 116 days leading up to dropping the atomic bomb. I also appreciated photos, such as that of Colonel Paul W. Tibbets waving good-bye from the Enola Gay before leaving for Hiroshima on August 6, 1945. Back matter includes extensive notes, bibliography and detailed index.

The extensive research required to write this book is obvious with documented conversations and behind-the- scene glimpses into duties and after-the-fact feelings about the event. An important read to remember the struggles faced by the men and women who peopled our history.