Book Review - My Heartfelt Passion: Saving Our Nation One Child at a Time

Author Jim Davidson believes illiteracy impacts every person in a community, so he developed a way to pass on a love of reading. His philosophy in a nutshell: Give a child a bookcase and some books and that child will become a reader. His program, “A Bookcase for Every Child,” strives to reach preschool children who are at greatest risk, those whose parents may not be able to afford books, children of low-income families.

Davidson founded “The Conway Bookcase Project” in 2005, and his project has expanded. In 2017, supporters built 50 personalized bookcases to give to children who most needed help. And similar programs have developed in six states.

According to Davidson, 61 percent of low-income families have no books in their homes, and illiteracy costs the United States billions of dollars a year in lost productivity, violence and crime. Inspired by his mother, who in spite of growing up in poverty became a voracious reader and reared a family of readers, Davidson set about improving literacy in society—one child at a time.

In his book Davidson offers concrete steps to develop such a program: Hold a bookcase fundraising banquet, find master builders to build the bookcases (from plans he offers), gather new and gently used books and hold an annual awards ceremony to present bookcases with nameplates to the children. He suggests how to maintain such a project. For instance, you need a treasurer to account for funding and disbursements.

The book includes illustrations of banquet tickets, announcements and letters to use in the project. He also includes photos of those working with him on this project.

Davidson is a public speaker, author and motivational consultant. The book includes details I might have skipped, such as naming people instrumental in building his program to honor their commitment. But his overall message—to make your community a better place by blessing its children with bookcases and books—is a unique and important message. He sounds a clear call to action for readers to commit to such a project in their own communities.

Posted by Shirley Brosius at 2:42 PM No comments: 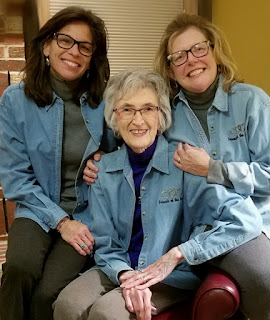 Twenty years ago, Kim Messinger, Janine Boyer and I began meeting as a small group. We would have never dreamed where our journey together as Friends of the Heart would take us. Here are answers to questions people ask:

1. Is Shirley the mother of Kim and Janine?


Nope. Kim met Shirley when Shirley served as a director of Christian education. Later when Kim and Janine were organizing Pioneer Club for their church, they thought Shirley's insight might be helpful, so they asked her to be their mentor and meet weekly to discuss Christian books.

While we’re not related, we fill voids in each other’s lives: Shirley lost a daughter, Kim never had a sister and Janine lost her mother at a young age. 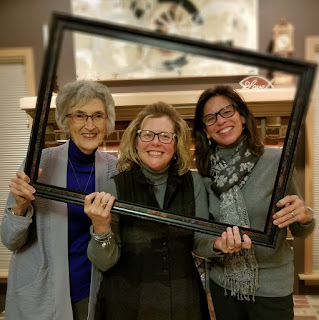 2. How often, where and when do you meet?

We have been meeting weekly for the last 20 years. We first met in Shirley's "Upper Room" office at 5:30 a.m. while Kim and Janine's husbands were still home with their kids. We now meet at a saner time, 4:15 p.m., around Shirley's kitchen table.

We each are committed to the Lord and appreciate opportunities to share our faith.

We’re married and have raised two children. We’re readers and active in our churches.

We enjoy coordinating our outfits for speaking (Kim is our fashionista), and we take periodic shopping excursions to update our speaking wardrobes.

We come from different generations, have different colored hair (one dyes; not saying who) and different personalities. Janine is a risk-taker who jumps from airplanes and other high places. Kim's feet raise as high as her stiletto heels; her idea of a wild time is taking her Newfoundland Mercy Grace for walks at the Ned Smith Center. Shirley has never even ridden a roller coaster. She’s scared to death of Mercy Grace (who once jumped on her, pinned her to the couch and licked her chin. Aargh!!!!). Her idea of a wild time is watching wild birds at her feeder. And on occasion, a bear (from safely inside her house).

Our tastes in décor differ as much as our heights: Kim is shabby chic; Shirley, traditional; Janine, contemporary.

5. How did Friends of the Heart come to be?

After we had been meeting for several years, we decided we wanted not only to study together but to serve together. So we visited shut-ins to pray with them and held teas for women who needed encouragement. Then Kim was invited to lead a retreat for the women of her church. She invited Shirley and Janine to help. We ministered to a group of ten women, ranging in age from high school to two octogenarians. We loved it. They said they loved it. So we held a tea and invited women in ministry to attend. We explained what we had to offer: inspirational talks, songs and scripture presentations. And Friends of the Heart was born in 2005. We held our first retreat for Colonial Park UM Church in 2006.

6. How many times a year and where do you speak? 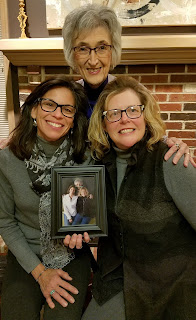 About 20 times a year at women's retreats and events. We have spoken in seven states, from Massachusetts to Florida and have ministered to more than 10,000 women.

7. What is the hardest part of your ministry?

The travel. Kim and Janine work full time, so it's hard for them to give up weekends. Shirley doesn’t sleep well away from home and hubby. Also long-distance parenting was challenging for Kim and Janine through the years of child-rearing.

8. What is the best part of your ministry?

Comments from women who leave our presentations motivated to walk more closely with the Lord. We’ve made friends with women from all over the East. Shirley and Kim keep up with several through Facebook and Janine enjoys phone calls with a Florida friend she led to the Lord.

Kim is a first grade teacher at Upper Dauphin Elementary School; Janine works in a family business; Shirley is a writer.

10. What is something people may not know about you?

Janine is a twin. She loves sports and has great family times with parents, three siblings and three step-siblings.

Kim has one brother; she and her husband love to cook and season foods with her homegrown herbs.

Shirley loves to read. She is the last living sibling of five. She understands the Pennsylvania Dutch language but cannot speak it. She also takes shorthand. (“What is that?” her grandkids ask.) 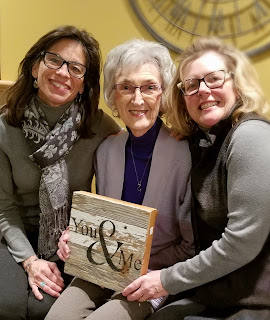 11. What are some memorable moments in your ministry?

The time we were nibbling on muffins in an airport and heard our names called because everyone else had boarded the plane. The time a man accidentally took Janine’s purse, thinking it was his wife’s. We had to have our rental car towed to turn it in. The memories of looking into the eyes of women eager to grow in faith. The memories of enjoying the décor committees come up with to relate to our themes. And the memories of trying to find our way to strange places (and back home again). We once tried to avoid a traffic jam and took more than an hour to recover our route.

Sometimes we cry as we share hurts. Sometimes we laugh so hard we cry, cracking up as we ad lib during skit rehearsals. But special moments come as we share praises and prayer requests every single week and then pray for each other. We have found God to be faithful in every experience of life, and it is our hope that others find faith in Him through the ministry of Friends of the Heart.

If you think of a question we didn't answer, just scroll down and post it in the comment section. We will try to answer.

Thanks for encouraging us on our journey!!!

Friends of the Heart

Posted by Shirley Brosius at 4:38 PM No comments: