In Honor of Veterans: A Personal Family Story 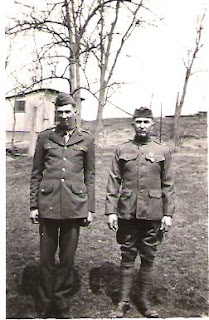 One hundred years ago, November 11, 1918, my father was stationed on a front line in France during World War I. In memory and in honor of all veterans, including two brothers and my husband, I’d like to share my dad’s story:

Veterans Day parades always made my father, Daniel Monroe Smeltz, choke up. As a child, I wondered what was so moving. But later in life I read his diary of World War I. Then I knew.

On November 11, 1918, he wrote, "The biggest day of my life. Eight a.m. runner reports that armistice is signed to cease firing at 11 a.m. There is heavy firing all through the morning, and we do not know what to think about it. We anxiously await eleven o'clock. After a few mighty bangs and roars, all is quiet. The war is over."

Daddy, a member of Company A, 34th Infantry, 7th Division, had sailed for on August 17, 1918. Ten days later he landed in , and soon headed to the front lines.

At St. Etienny, he bathed in the and came down with a sore throat and fever. Too ill to march when his company moved to Averainville, he rode on top of an open supply wagon—in the rain. Later he slept on a stone pile—in the rain.

On November 1 Daddy noted that he had carried ammunition, barbed wire, picks, shovels and grenades to front lines and returned under German machine gun fire. A second trip resulted in a "close shave" when Germans started firing "one pounders."

But Daddy made it safely home to the farmlands of central . He used his military severance pay to buy a John Deere tractor, which became his pride and joy as he worked on his parents' farm. For a time Daddy also worked as a carpenter in the coal mines. As he drove to work he noticed a pretty young woman walking to work in a shirt factory.

One day he stopped and struck up a conversation with Grace Huntzinger. They soon married and settled in a small house my father and a friend built by themselves. My brother Robert arrived in 1925, Ruth in 1926 and Russell in 1929. Just after Russell's birth, my parents purchased Daddy's family homestead from his stepmother, paying $5,000 in installments. Sister Marie was born in 1931.

In 1936 Daddy was hospitalized with rheumatic fever. In those days if a patient died, the doctor didn't charge the widow. Dr. Dunkelberger was so sure that Daddy would die that he didn't keep track of his bill. But Daddy surprised him. And I was born in 1940, “way on behind,” as they say.

Daddy's ensuing heart condition made farming difficult, especially in the summer heat. For extra money, he cleaned one-room schoolhouses. I loved the pungent smell of the green cleaning compound he sprinkled on the floors. He also sold religious books door-to-door, so I always had plenty to read.

My earliest memories of Daddy include "gall attacks" in the middle of the night. Mom would cry, worried he was going to die. We had no phone, so an older brother drove to a neighbor's house to call the doctor. Soon I would hear Doc Dunkleberger's heavy steps on the stairs, and in a day or two Daddy would be better.

Daddy treasured his vintage 1920s Kodak Junior camera. A bellows opened from a flat case. To take pictures, he snapped a shutter release on the end of a cable. He cranked the film rewind by hand. Once the number in the orange dot indicated that the film was filled, Daddy disappeared into our windowless bathroom, which was located behind our kitchen and contained only a bathtub and a waist-high cabinet. Soon the distinctive odor of developing fluid spread throughout the downstairs.

With his camera, Daddy documented our family history. There we are—my parents sitting on kitchen chairs in the front yard, me on my mother's lap and my siblings standing behind us. There are Daddy and Robert wearing their Army uniforms. And, of course, Daddy took plenty of photos of me—the baby of the family.

Sundays we all went to church. Daddy and my brothers sat on the right side of the sanctuary, and my mother, sisters and I on the left. The pastor and his wife often came for Sunday dinner. Daddy or Mom always blessed our meals with a prayer.

A photo of Daddy wearing his Sunday suit and his American Legion cap hangs on a wall in my home. He looks so proud. And well he should. Our Daddy left behind a legacy of faith, patriotism, hard work and love for his family. I hope to pass on to my grandchildren.

This post should have gone out at 8:30 a.m. November 11; I'm reposting, since it did not seem to publish. Forgive me if you get two copies.

Posted by Shirley Brosius at 5:15 PM No comments: 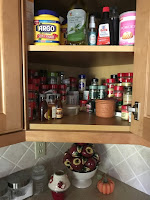 I made surprising discoveries as I housecleaned kitchen cupboards. A small jar of pepper I looked for turned up. I gained valuable shelf space by combining smidgens of coffee. I pitched solidified marshmallow cream and stale snacks, threw out old heavy oven mitts that I never used and found a bag of pecans (surely stale by now) I didn’t know I had.

When I was young, loose fitting screens and doors invited pests into our homes. Cupboards were high and deep with contents easily forgotten. Dust from our unpaved lane covered even the insides of closets, so we housecleaned each spring and fall. Now homes are tighter, so it’s said we no longer need to houseclean. Don’t believe it! 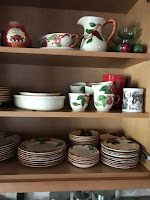 Housecleaning restores order and eliminates clutter. We find forgotten contents. And we get a fresh, clean start as we wipe away dust, dirt and crumbs.

Perhaps our lives need the same housecleaning. We might start by asking ourselves the five W questions reporters ask when writing a story:

Who am I? Have you found your true identity? Is your identity wrapped up in your work? Do you feel at loose ends if you’re not working? Does your work consume your time and thought?

Do you think of yourself as “only” a mother, a wife or a daughter and put yourself down for not acquiring a more important status in life?

Our identity is provided by our Creator God who made us in His Image. We are His children. His Son Jesus died so that we may spend eternity in heaven. This earthly existence prepares us for that eternal future. Have you spent time considering your relationship with God and how that affects your relationship with others? Like finding lost ingredients in my cupboards, finding your true identity allows you to enjoy a well-balanced life in tune with God and others. 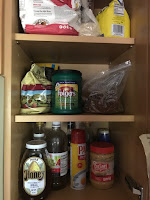 What am I here for? God has a purpose for each of our lives. Whether we’re called to raise a child or solve a universal problem, we have a purpose. Everything we experience can, by God’s grace, be used to encourage someone in a similar situation. If we keep such stories to ourselves, they get as stale as my pecans. What opportunities do you see to support someone by sharing your story with them?

What is God calling you to be about? What spiritual gifts and talents has He given you? What burden has He placed on your heart? Share it with a friend and see where it leads.

When might you spend time with God to houseclean your thoughts and emotions? He will help you recognize expired items in your life—unforgiveness, bitterness, grudges, jealously, anger—and replace them with peace of mind. We may think “out of sight, out of mind.” But God wants us to bring ugly feelings into the light of His love. He is able to infuse us with His compassion, understanding and grace to pass on to others. And that leaves us with fresh products of joy on our shelves.

Perhaps a neighbor offended you as a child, and you’ve never forgiven her. Perhaps a coworker turned on you in some way and you’ve held a grudge. Perhaps someone blamed you for something you did not do, and you’ve harbored resentment. Time to (as the song says): Let. It. Go.

Where will you go to connect with God? Do you have a prayer corner? Do you attend church? Do you pray before you make decisions? God is everywhere, and He is happy to interact with us no matter where we are. But He is a gentleman. He does not intrude if not invited.

Do you ever go to dark places where you hope God doesn’t see you? To clean my cupboards, I climbed a step stool to peer into back corners of high shelves. Invite God into every room of your house and let Him help you empty waste cans and toss garbage. What about those books and magazines? What about that snarky language that you use only with your family? What about that grumbling that stops as soon as you pull into the church parking lot? Invite God into every nook and cranny of your life.

Why should you bother to houseclean your life? Life passes quickly. “Our lives may come to seventy years, or eighty, if our strength endures; yet the best of them are but trouble and sorrow, for we quickly pass and fly away.” Psalm 90:10

We never know when God will call us home. I’ve been graced with more than seventy years and they feel as fleeting as the blink of an eye. I watched my children grow up and now see my grandchildren becoming young men and women. I am so glad I dedicated my life to Christ as a young woman. I know I’ve made plenty of mistakes along the way, but my basic motivations and intentions were meant to glorify God. I hope you can say the same.

But if not . . . simply stock up on cleaning supplies. It’s never too late to houseclean your life and make a fresh start.

“For no one can lay any foundation other than the one already laid, which is Jesus Christ. If anyone builds on this foundation using gold, silver, costly stones, wood, hay or straw, their work will be shown for what it is, because the Day will bring it to light. It will be revealed with fire, and the fire will test the quality of each person’s work.” (1 Corinthians 3:11-13)

Posted by Shirley Brosius at 9:49 AM No comments: