Book Review: The Boys in the Boat 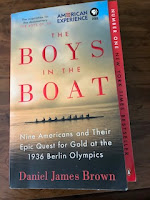 The Boys in the Boat: Nine Americans and Their Epic Quest for Gold at the 1936 Berlin Olympics by Daniel James Brown

This heartwarming story focuses on Joe Rantz, one of the boys who grew up, went to college and made the team—against all odds. He was deserted by his father and stepmother as a boy and bounced from household to household on his road to maturity. Yet he persevered, enrolled in college and became one of the young men in the boat who rowed their way to the 1936 Olympics.

Brown has done a masterful job of researching all aspects of this story down to the posturing of Hitler and his cohorts as they hosted the Olympics while keeping the world in the dark about their insidious plans. The book includes 15 pages of extensive notes plus a detailed index. Brown spent countless hours with Joe Rantz’s daughter Judy, who shared scrapbooks, photographs (many included in the book) and letters and retold the stories she heard from her father.

In the depth of the 1930’s depression, the boys in the boat defined what teamwork means and what it can accomplish. Their coach, Al Ulbrickson, and the builder of their boat, George Pocock, played instrumental roles in the team’s success. The book leaves you inspired and encouraged to persevere in the face of adversity. I thoroughly enjoyed reading the story of the boys in the boat.

Posted by Shirley Brosius at 11:17 AM