Rook Review: The Case for Miracles 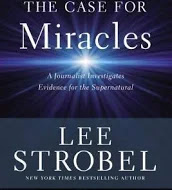 The Case for Miracles: A Journalist Investigates Evidence for the Supernatural

Written by a journalist who is an atheist turned Christian, this is a thoughtful read. In defining miracles, author Lee Strobel suggests Professor Richard L. Purtell’s definition that defines a miracle as an event created by God’s power that is an exception to the ordinary course of events.

Strobel presents his case for miracles by interviewing “experts” on the subject. His introduction presents examples of present day miracles, but he then offers the case against miracles through an interview with Dr. Michael Shermer, once a committed Christian who might now be called an apologist for disbelief. He believes miraculous occurrences have rational explanations.

But Professor Candy Gunther Brown begs to differ. She too has examined miracles and refutes claims such as those made by Shermer. She says his studies fail to consider that miracles seem to be clustered in certain world areas, fail to recognize some people are “anointed” with healing power and fail to recognize the role of faith in the giver and receiver.

Strobel devotes a chapter to the miracle of dreams and visions that continue to bring people, especially Muslims, to Christ. Strobel himself was strongly influenced by a dream.

The resurrection of Christ is examined through Strobel’s own critical lens: A miracle needs to be supported by solid facts and evidence that is corroborated by others. Strobel also considers that we might hear more of miracles if Christians were not embarrassed to reveal how God has demonstrated his power in their lives.

The book closes with a look at miracles that don’t happen through an interview with Dr. Douglas R. Groothuis, whose wife Becky, once a prolific Christian writer, has descended into dementia. Strobel quotes Tricia Lott Williford, whose husband died unexpectedly leaving her with two small children: “The truth is, there’s no formula we can count on for when Jesus says yes and when he says no. That’s the catch with sovereignty: He gets to decide yes, no, if, when, and how . . . . We can, however, base our confidence on his faithfulness.”

Since the book contains a “Guide for Group Discussion,” it would make an excellent small group study. Back matter also includes “recommended resources,” extensive notes and in index.

This book offers a thorough presentation of the state of miracles in our world today. You will come away appreciating Strobel’s thorough research.

Posted by Shirley Brosius at 11:12 AM